City of Setagaya and Setagaya Arts Foundation gives out art awards in the five sections of “design,” “theater,” “music,” “art” and “literature” in the Setagaya Art Award “HISHOU,” with the aim of supporting the variety of cultural and artistic activities of young artists.
The Music Project Department is accepting entries for the Music Section. Those who wish to apply are asked to read the leaflet (PDF) on how to apply, and send the necessary materials by post or bring them to the office.
The Music Section will give out 500,000 yen in prize money to the winner, and hold an award commemoration performance (concert) at Theatre Tram.
【Application deadline】Thursday, October 10, 2019 (postmark deadline) 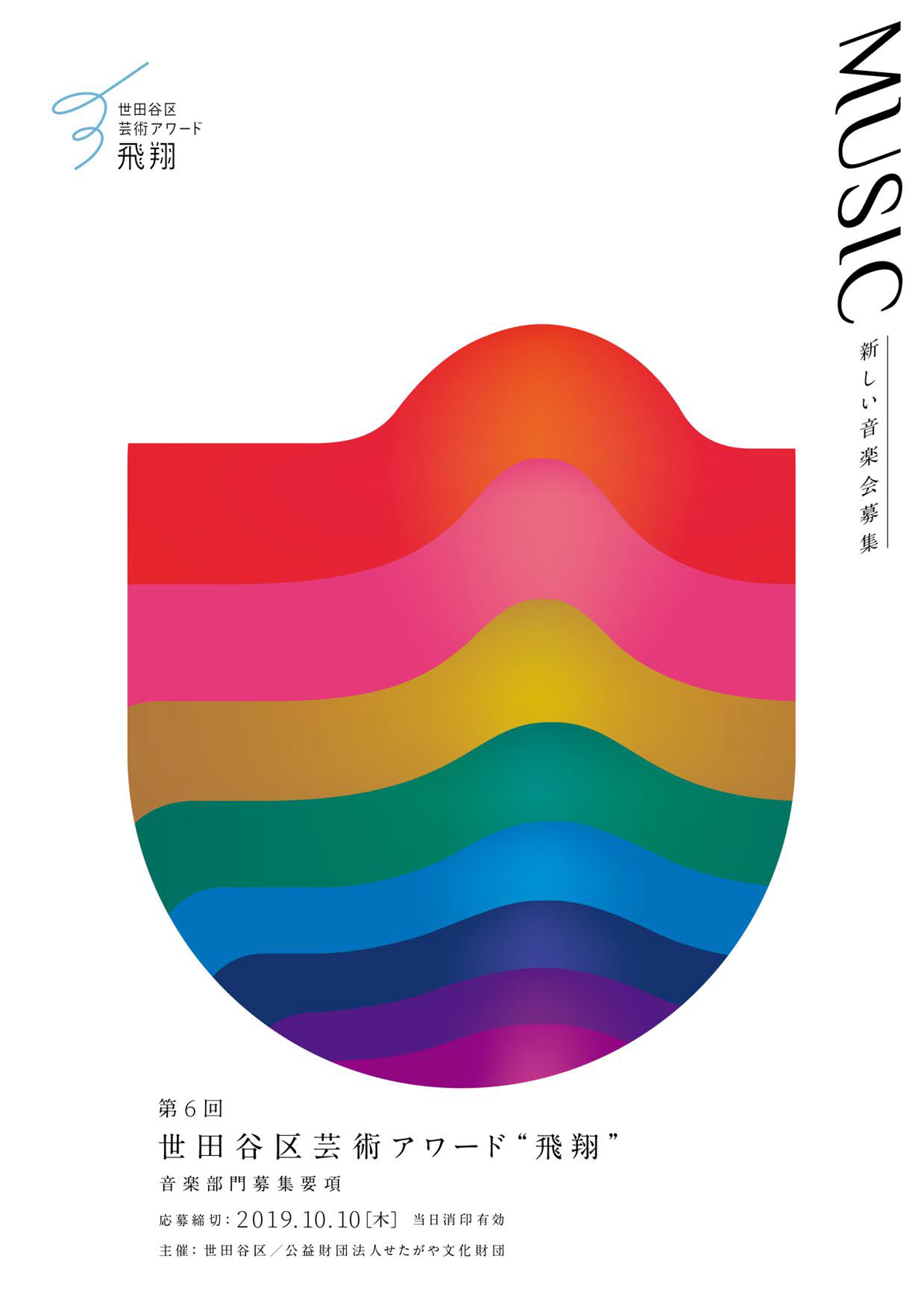 Click here for more details on how to apply.(PDF)

●The proposed concert must promote the charms of music, offer ideas on, e.g., how to appreciate music, and be highly original.
●The planner and performer(s) may be different people, in which case the details of the performer(s) must also be given in the proposal.
●The proposed concert must be of a scale suitable for Theatre Tram , and the method of performance must be original, reaching out to people of the next generation.

Individuals or groups who have the will or ambition to engage in sustained cultural or artistic activities in the future, and who satisfy all of the following five criteria:

1. Those applying on their own behalf.
2. In the case of an individual, the applicant must be 15 to 35 years of age (inclusive) as of April 2, 2019. In the case of a group with two or more members, the representative must be 15 to 35 years of age (inclusive) as of April 2, 2019.
3. Those who have not already been awarded the prize in the past.
4. Those who are able to give an award commemoration performance (concert) of the winning proposal should they be awarded the prize, in November 2020 at .Theatre Tram, upon negotiating with the Music Project Department. They must also cooperate in making preparations.
5.Those who are not under the control of crime syndicates (as defined in Article 2, Paragraph 1 [Article 55 of the Setagaya Ordinances enacted in December 2012] of the Setagaya Ordinances on Promoting Activities to Exclude Organized Crime Syndicates) or members of crime syndicates (including groups affiliated with crime syndicates).

●Screening and selection by the Music Project Department.
(Applicants may be interviewed. Around 30 minutes sometime between Tuesday, November 5 and Saturday, November 9, 2019)

●Screening and selection by the Music Project Department and external judges.

He is known for Akira Terao’s “Ruby Ring,” and hit songs for Eiichi Otaki and Masaharu Fukuyama, among others. He has released songs spanning different genres, and gives live performances as a sensitive and sharp music composer and arranger. He has presided over the El Cant dels Ocells project since 2012. He has published a book titled, “Boku-no Oto, Boku-no Niwa (My Sound, My Garden).” In 2017, he released his 14th solo album, “OSTINATO,” at the same time as “Seeing” and “Believing,” which he composed and arranged. In December 2018, he released “OSTINATISSIMA” consisting of three instrumentals.
Official Site

Hideki Togi was born in Tokyo in 1959. The Togi family has a tradition of “gagaku (ancient Japanese court music),” which can be traced back to the Nara period 1,300 years ago. Due to his father’s job, Hideki spent his childhood abroad and grew up surrounded by various kinds of music. While he worked for the Music Department of the Imperial Household Agency, his main focus was the “hichiriki (Japanese wind instrument),” but he was also in charge of playing the “biwa (Japanese lute),” various types of drums, singing, dancing and cello. He not only took part in ceremonies at the Imperial Palace and “gagaku” concerts, but also participated in overseas performances, playing an important role in introducing traditional Japanese culture and cultivating international goodwill. He debuted in 1996 with his album, “Togi Hideki.” He channels his passion into original performances to bring out the inherent characteristics of “gagaku” instruments. In August 2018, he released “Hichiriki Cinema,” an album of the soundtracks of movies that were huge hits in Japan and overseas, including “On My Own” from “Les Miserables,” and “Gondola no Uta (The Gondola Song)” from the movie, “Ikiru (To Live),” directed by Akira Kurosawa.

●Screening and selection by the Setagaya Art Award Screening Committee

Planned for around late-January to February 2020.
To be held in Setagaya-ku, Tokyo.The winner shall be obliged to attend.

Planned for October 2020.
To be held in Setagaya-ku, Tokyo.Introduction of the winner and winning concert.

Planned for sometime between Thursday, November 12 and Sunday, November 15, 2020.
The award winner(s) will perform the award-winning concert at Theatre Tram.
Preparation, rehearsal and concert dates shall be decided upon negotiation within the designated period. In holding the concert, the Music Project Department shall pay for the cost of using the venue, using all incidental facilities, providing a venue guide, etc., and cooperate in promoting the event.